It feels a bit like deja vu when I type out: this weekend we celebrated with a huge fiesta!

Wait, didn’t we do that last week?

Yes; Mexico clearly thought it was getting too quiet around here and it was time for another party. Thank goodness for that.

Every day when I walked home from work this week people were selling bouquets of these beautiful tiny yellow flowers and twisting them into crosses. They were to be placed on your front door, a woman explained to me as I passed her 10 pesos, to keep the devil out.

If you’re curious about why the devil might visit Tepoztlán, here’s a brief religious explanation:

Sunday September 29th is the feast day of San Miguel — or as we might know him, St. Michael. Traditionally, the day commemorates when the archangel Michael defeats all the forces of Satan and evil in military battle. Sociologically, it’s fascinating to study how this motif of St. Michael has spread to different countries around the world. Many Christians interpreted the angel Michael destroying idols as validation to destroy other religious traditions; it became a common trope in colonial theology and art … hence, whenever you see a cathedral named after the archangel Michael, you can know that that 8 times out of 10 that cathedral replaced an earlier site of indigenous worship.

St. Michael’s day is a day to celebrate the forces of good conquering the forces of evil. Socially, it’s been horrifying throughout history to see who we determine to be evil: who we accept and who we shun, who we welcome and who we turn away.

It’s also a day of hilarious fun. I went with my family to a tiny pueblo near Tepoztlán named San Miguel, and the

whole town celebrates their patron saint for at least a week. We arrived to the house of our family friend and wandered about the town square filled with scaffolding for fireworks, rollercoasters, and a huge dance floor. Hundreds of people had made the pilgrimage to this tiny town, which meant it was crowded and noisy before the party even started. 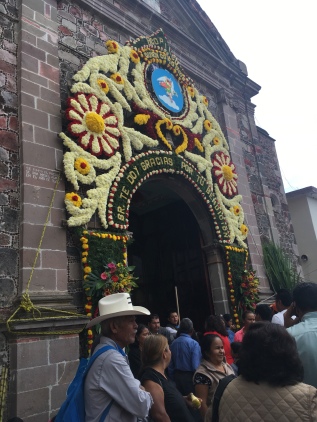 [This is only the outside of the cathedral; hundreds of fresh roses and lillies filled the sanctuary!]

My first impressions of San Miguel were that I felt so shocked to be invited a place where it was clear few ‘foreigners’ had gone. In Tepoztlán I now can blend in pretty easily with other foreign tourists; Germans and other Europeans on a spring break fling. We walked in to a restaurant in San Miguel–where everyone seemed to have known each other for years, so more like we walked in on a family reunion breaking for dinner–and … I was the only white person there. The only one for miles, I suspect. Children openly stared and adults pretended not to. My host dad took me under his arm and loudly introduced me as, (Spanish translation) “This is my light-skinned daughter!” As the night went on, I would joke on his introduction, “Can’t you see the resemblance? We look just like twins.” As people passed tequila and more families introduced me to their families, I was grateful at the efforts people took to make me feel welcome. One family friend passed me tequila and invited me to join the dance. The dance was a traditional one with a specific costume; men wore white trousers and blazers, the women beautiful red and white dresses, and every dancer had a red necktie and sombrero. They produced a similar outfit for me and encouraged me to join the dance.

I froze. Remembering all of the talks on my campus regarding cultural appropriation, I hesitatingly tried to formulate my confused thoughts on donning a traditional Mexican dress to my host father: “Wouldn’t it be … I’m not Mexican … is that … rude, or, insulting?” My host father seemed bewildered at my question ~ so much so he told it often to people over the weekend. He responded to my faltering Spanish with similar English as he said, “It is a gift, Annie. A gift from the heart. Is that wrong?” So ~ I donned the handkerchief and sombrero and wore it. I joined the huge crowd of dancers. It was a long line dance where whole families danced together: tiny babies in their parent’s arms, young girls with braces, old men with white hair. Throughout the dance people would start dancing with gifts, and after the dance, pass them out to the eager audience: a curious array of candy, crucifixes, and telephones from the 90’s. An aunt of the family gave me a huge cooking pot, and when I looked confused, she responded, “Because you danced all night!”  We walked home with enough sweet bread and sponges to last us a year.

During the day, they had built a huge scaffold that was almost as high as the church tower. It had been crazy to watch young men hauling huge pieces of equipment over their shoulders and hoist them up with ropes. Then the entire thing went up in fireworks; with spinning wheels and swinging bells and HUGE rockets that made the sky explode with light. The music and the fireworks continued all through the night. I, feeling overstimulated and exhausted, hid under my blankets for the remainder of the evening. As someone who loves dances and live music and fireworks, it’s impressive to say that Mexico wore me out that day. 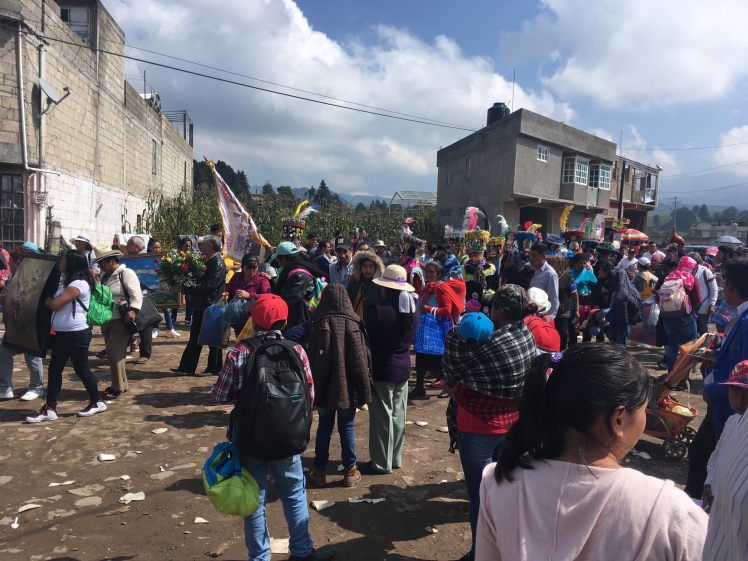 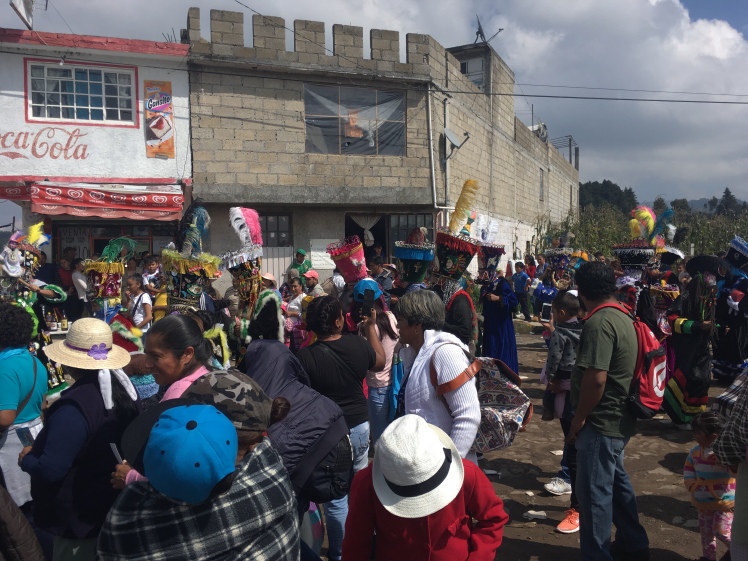 The next day I awoke to fireworks and mariachi bands in the street. Church bells were ringing and there would be at least seven services for mass that day. My host family eagerly urged me out of bed (where I would have been happy to stay after all the noise last night) and out to the street. A huge parade with statues of the virgin Mary, Jesus, and the archangel Michael were being processed down the streets. A dancing group had specifically come from Tepoztlán with extraordinary costumes that can only be seen to be believed.

I asked my host father later that night on what the dance and the costume signified, and he replied (translation): “It represents the Europeans when they first arrived to Mexico; when the Indigenous people first saw them, with huge beards and pointed noises, they depicted it in a dance.” I was fascinated by the response, and by the depiction of a colonizer by the colonized. I feel like I have so much to explore and write about when it comes to Mexican heritage, where reading every book ever written on the subject and living here a hundred years couldn’t quite scratch the surface. The question(s) comes down to: how do we encounter, interact with, and represent one another?  [insert, a fascinating op ed: New York Times: teenager’s prom dress scandal ]

As I talked to so many people that day curious to hear where I had come from, I was surprised at how nearly every one responded “I have a [nephew, brother, daughter, or insert relative here] living in Chicago!” I followed up with the common reply that I learned to never ask, “Have you ever been?” Because people would always respond, “We’d like to … but … the paperwork….” Our eyes would meet and the unspoken understanding passed between us that while I could visit their town for a holiday weekend in Mexico, they couldn’t visit their families for a holiday weekend in the US. Certainly not as visa regulation has become more and more restrictive under this presidential administration.

So, I suppose this recollection of La Dia de San Miguel ends where it begins.

St. Michael’s day is a day to celebrate the forces of good conquering the forces of evil. Socially, it’s been horrifying throughout history to see who we determine to be evil: who we accept and who we shun, who we welcome and who we turn away.

One thought on “El Diáblo viene …”

Where in the World Is Annie? 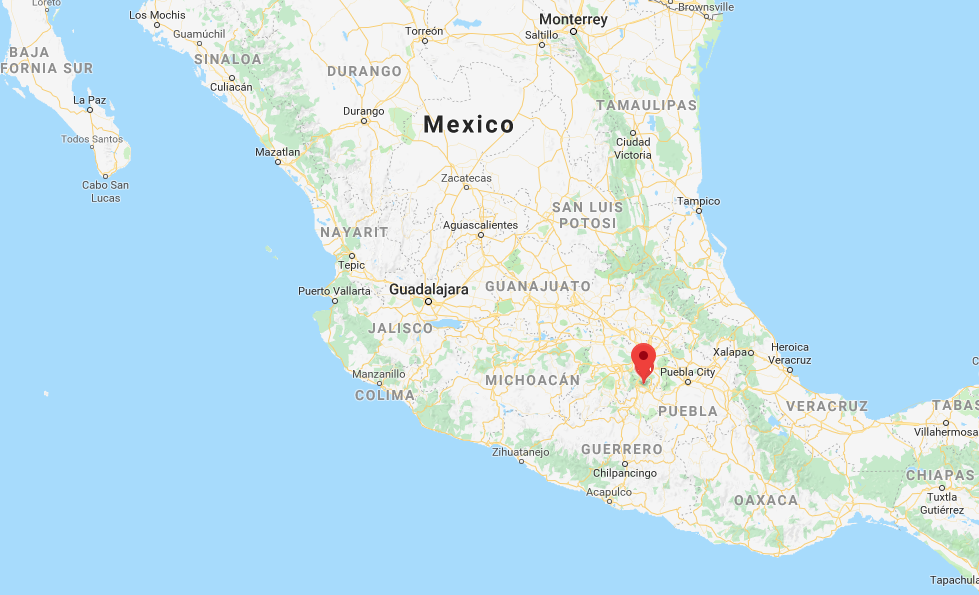 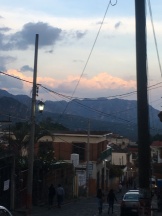 The view from my house at sunset 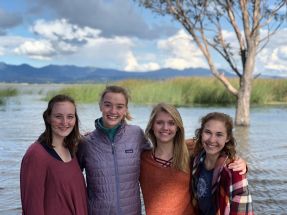 Courtney, Amelia, me, & Christine: if you ever get the chance, follow their blogs, they are amazing writers!

My favorite photo of all time 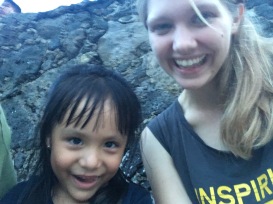 Me & my host sister Sofia! 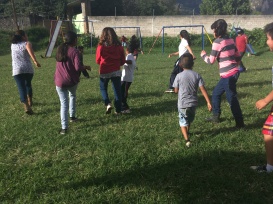 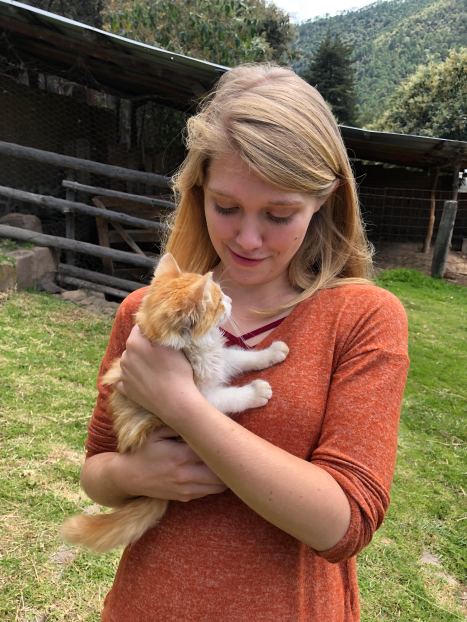 Courtney Noya: The Eucharist and the Stranger

Christine Hart: Something you never Knew